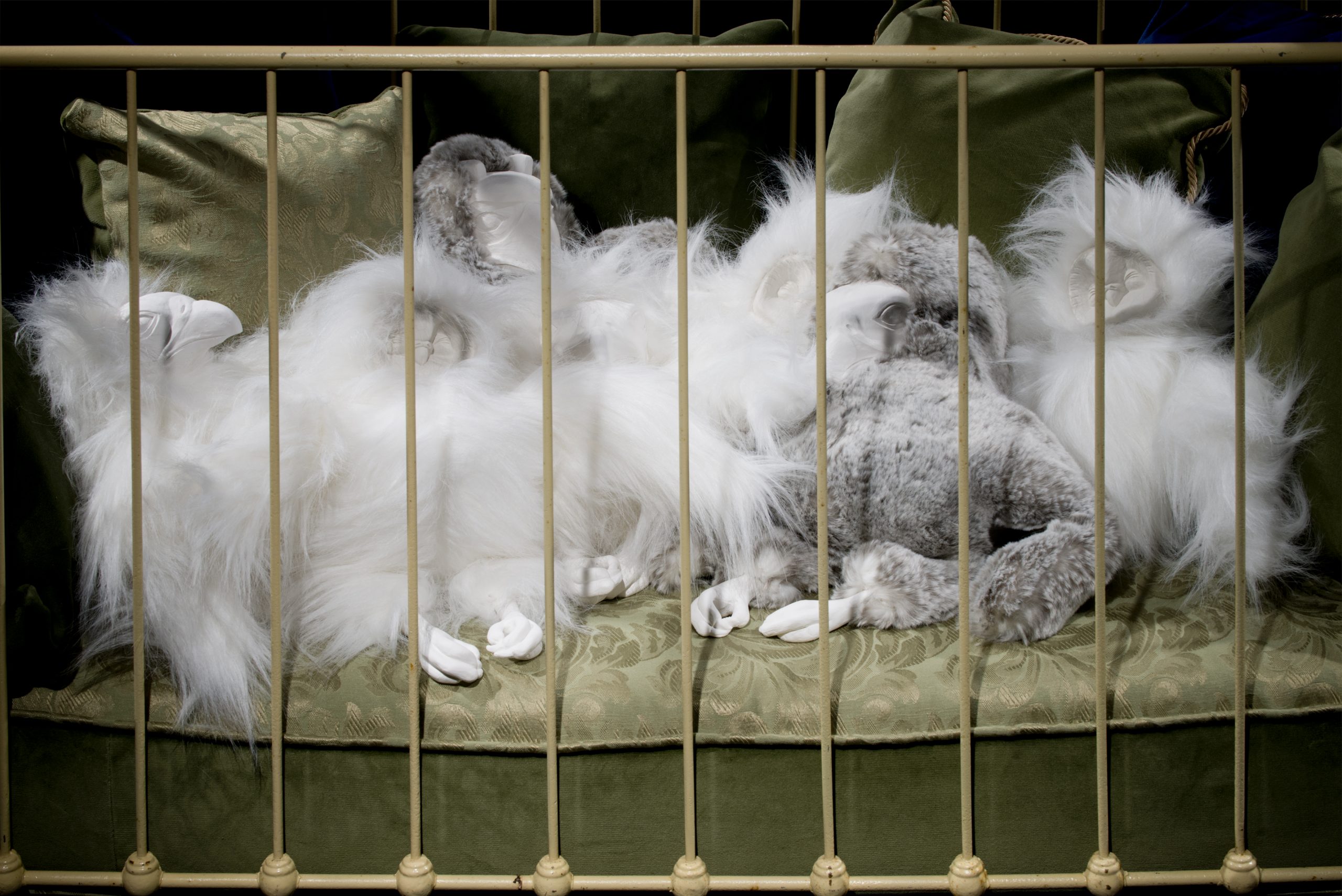 In response to Mary Anne Barkhouse and Postcommodity

What follows is not an elaboration of a single argument, as is seen in the normative scholarly essay. I offer a series of reflections on the Esker Foundation’s Fall 2017 exhibition of works by Mary Anne Barkhouse and Postcommodity. I use the form of the glossary to do this, which allows for experimentation, for a haptic mode of writing and thinking that takes nothing for granted.

We are in an afterlife of the horrors of twentieth-century settler statecraft called the supernatural. It is not just that we are haunted by what remains of the traumatic experience of being made to live in a world we did not want. What is more is that colonization ushered in an approach to being and to being in the world that made the natural into a non-object to which none of us in the so-called New World could cling. The natural is not about a state of purity somehow unscathed by the tumult of human intervention; rather, it signifies for me a sphere of experience that is prior to the ontological blow to Indigenous subjectivity that followed settler invasion and is produced anew to this day. To be sure, I am not desirous of a way of thinking that transforms the natural into a specter we want to conjure from the graveyard of history, as if it could rescue us from a present that has already set its sights on what is to come. Opposed to a mode of cruel nostalgia that installs the past with a form of affective power that stuns, I want instead to argue that we are now in an era that mushroomed in the ash of the natural. We are all supernatural now, however differently embodied. Undead, unbound, unsafe, the natural exists as a negation of a negation. Citizens of an un-, we, those who are both before and more than the human, float in the air like an unanswered question.

The supernatural is one iteration of the geographical forms of the Anthropocene. The Anthropocene is a mega-category inside which vibrates an unknotted mass of objects. Heather Davis and Zoe Todd have noted that the “Anthropocene” pollutes its own diagnostics by evenly attributing blame to all who are hailed under the sign of the “Anthropos.” However, the tenants of the terrains of bad affect are those against whom Man was and is unleashed. Davis and Todd argue that we ought to trace the complicated beginnings of the Anthropocene to the colonial period, which would name “the problem of colonialism as responsible for contemporary environmental crisis.” Colonialism inheres in a death drive that makes it difficult to engender life unhinged from the affective wrath of misery. Ecocidal and genocidal, colonialism assaults the capacity to flourish those who practice a form of sociality that does not erode or seek to dull or manipulate “the physics of our surround.” Perhaps ironically, perhaps not, this victimizes those it intends to elevate to a form of utter sovereignty, made killable in their viscous want of unkillability. Nonetheless, it is us, the wretched of the earth and animal kin, who bear the brutalities of this world-ending performance of worlding. The Anthropocene, however, does not beget doom and gloom and nothing else. Here is Anna Tsing: “The concept of the Anthropocene both evokes [a] bundle of aspirations, which one might call the modern human conceit, and raises the hope that we might muddle beyond it. Can we live inside this regime of the human and still exceed it?” But maybe this is not quite the right question. How about: can we take on a form of conduct that both precedes and is more than the human?

Belonging to the Nimpkish band of the Kwakiutl First Nation, Barkhouse demonstrates an artistic practice that frustrates the torture of anthropocentric classification. Her Le rêve aux loups (The Dream of Wolves) is a world writ large, one in which time is pitted against itself in order to apparate that which was to be done in by the angered march of progress. At once sculptural, industrial, and imagistic, Barkhouse’s installation draws out the power of objects to enable something like time travel. Bookended by engagements with the still lifes of seventeenth-century Dutch painter Melchior d’Hondecoeter and the Truth and Reconciliation Commission’s (TRC) Final Report, Barkhouse attends with an exacting critical eye to the longue durée of formations of colonialism, which are programmed to bring about what the late historian Patrick Wolfe called the “summary liquidation” of Indigenous peoples. In one register of meaning-making, Barkhouse juxtaposes the vulnerability of the natural with the plagiarized innocence of eighteenth-century furnishings, which flowers a dialectical clash that if nothing else reveals the anti-terra world of Man. An ensemble of creatures that appear in the cosmologies and oral traditions of a host of First Nations rebelliously populate the “interiors of the Sun King, Louis XIV of France” in a modality that I want to describe as phantasmic. Here, Barkhouse is a cartographer of the unseeable, mapping a flow of affects, peoples, and ideas that both traverses the globe and brings the globe into being as a category of empire. Further, in Aerie, a response to the TRC, to the ugly ongoingness of the brutal feat of death policy that was Indian Residential Schools, Barkhouse takes up Kwakiutl thoughtways to depict a mode of radical hope, an Indigenous operation that is against the exhaustibility of hope. Fledglings, caged in a Victorian-style wicker pram, one that Barkhouse calls a “child containment unit,” represent the objects of the cruelties of state biopower. Thunderbird and Raven, at once animalistic and otherworldly, are stationed nearby, if only to throw into relief the constitutive impossibility of settlement, how it fails to bring about the end of Indigenous ways of knowing and being. Barkhouse rebels against settler ontology, against colonial aesthetics, against what both of these have gobbled up, all that they have torpedoed out of the world and made into non-beings. 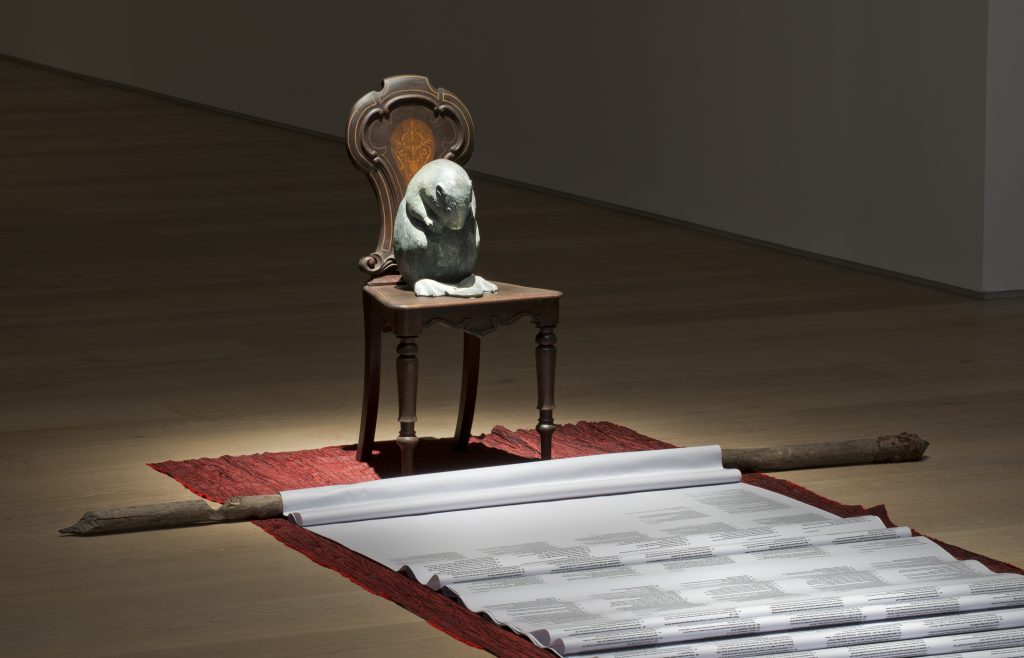 The beaver mediated some of the earliest moments of contact in what is now called Canada. On the verge of extinction in the United Kingdom, the beaver was roped into a semiotics of colonialism in which it symbolized 1) the thingification of the land and animal life and 2) the conquerability of the Indigenous peoples configured as transitory, vanishing, non-humans. The beaver disappears to evoke settler sovereignty. In Barkhouse’s Le rêve aux loups, the beaver represents that which cannot in the end be wholly negated. At one end of the gallery, it bears witness to the summary of the Final Report of the TRC, which works up a structure of feeling that hardens outside of the emotional field of the humanitarian undertaking that is historical redress. Barkhouse entices us to ask: what might it mean to position animals as ethical subjects in the arenas of settler governance? Perhaps more importantly: as documentarians of what lingers from a past that is not done with us? These are questions askable only in the realm of the supernatural.

Coyote is a material-semiotic creature unlike any other. A trickster, coyote is a harbinger of a time and place that already was and is yet to come. Coyote is an ethicist too, one who shape shifts and time travels to hammer down judgment on those who make the world poisonous for life. Wherever coyote is, so too is the feeling of utopia, so too is the possibility of escape.

The border is a mode of visuality in and of itself. It elicits a way of seeing that is endemic to modernity, to racial capitalism. Hidden in the low hum of context, in the gross ordinariness of state enactments of biopower, the border is ecological, harboring norms, patterns of thinking, and affective resonances that eschew visibility. However, if one listens closely, one might hear the whirr and buzz of its vulgar mechanics. This is a form of decipherment that Postcommodity’s A Very Long Line requires of us. A four-channel video installation, A Very Long Line images the fence splitting the United States and Mexico between Douglas, Arizona and Agua Prieta, Sonora. Already, “splitting” is too weak, too everyday to index the catastrophic interplay of U.S. nationalism, security theology, settler land-grabbing, data mining, xenophobia, and the governance of affect that all descend on those at the border. What we see are shots of the border on all sides, at a mix of speeds, all of which are set to the tune of a frenzied soundtrack composed by the artists (Raven Chacon, Cristóbal Martínez, and Kade L. Twist). I am unable to decide if the riot of noise is diegetic or not, but perhaps this inability to distinguish what is of the world or not is related to the unnaturalness of the border and its world-distorting uses. Postcommodity slow down and speed up the time of the border, which blocks the Seeing-I from banishing what is seen to the dedramatized visual terrain of everyday life. In this way, A Very Long Line enacts a transference of affect that mimics the spheres of experience of those brutalized by the tumult of state-making. Bound, confined, over-stimulated, dizzied, the viewer is uprooted from “a body” and made to take on the skin of the border, which nauseates and disorients. Perhaps this is what it is to inhabit the core of the supernatural. Anyway, what is to be made of that which proliferates in the gaps between the border? Indelibly marked by the all-seeing gaze of the border, those who make life on either side harbor a world-to-come. What epoch might follow the supernatural?

Tsing: “We are stuck with the problem of living despite economic and ecological ruination.” The supernatural, which is the zone of non-being in which swaths of the earth’s population are made to live, nonetheless frustrates the desire for finality that is settler colonialism. Explosive, heavy, the time of planetary conquest threatens to imprison us in a state of unending despair. The border looms as the impending atmosphere of the whole world. Animal kin recede further into the status of profound non-sovereignty. Attempts to right the wrongs of a horrific history flounder in the face of an ever-multiplying many-headed hydra: racial capitalism. Stuck, right now, but momentarily, the supernatural is a place from which to hone an art of protest that collectivizes those wrenched out of the shallow refuge of the human. Together, we take on a being in non-being. Together, we enact forms of care against the embargo on care that is the Anthropocene. 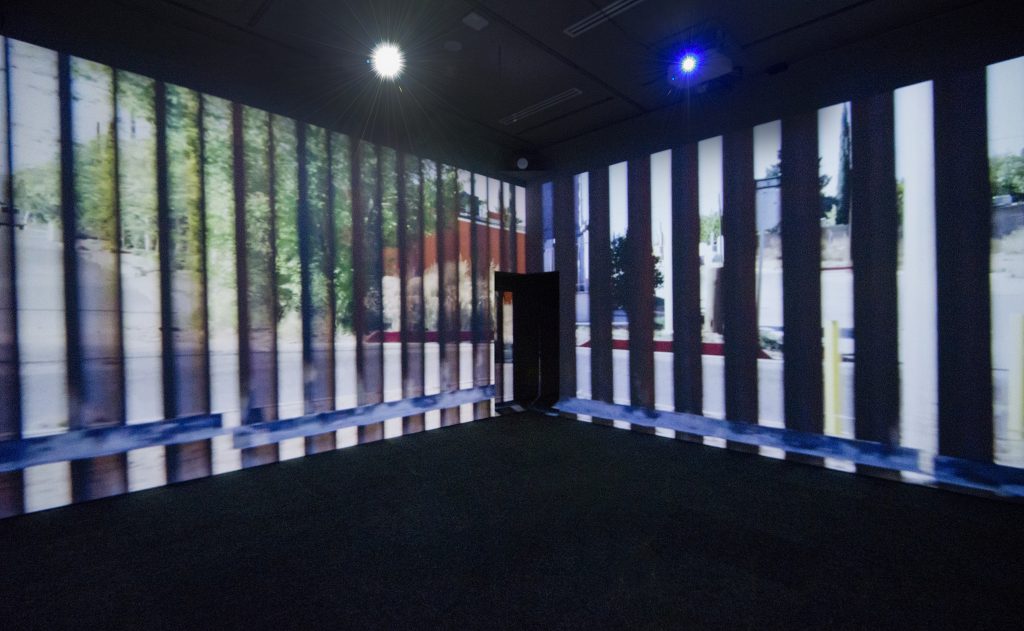 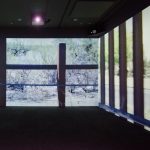